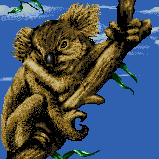 Luigi's photograph of a koala in the Taronga Zoo

“The koala is a world famous symbol of Australia. Contrary to popular belief, koalas are not bears but marsupials. The country 'down under' is the only place in the world where the small, cuddly animals can be found. The Taronga Zoo has its own landing wharf to receive the ferry boat which brings visitors from Sydney, a 25-minute ride away. The zoo is the nearest place to the city where tourists and Australians can see the koalas and other animals unique to this country and continent.”
—Pamphlet, Mario is Missing!

Taronga Zoo is the city zoo of Sydney, Australia. It is famous for being the nearest place to Sydney where koalas can be found. One such Taronga Zoo koala is stolen by Koopa Troopas in all versions ofMario is Missing!. Luigi's task is to find and return it to the zoo. He was rewarded 2,100 dollars plus a bonus of 2,800 dollars if he did so and successfully proved its authenticity by answering the following questions:

Additionally, an in-game news article states that, during the events of the game, the Taronga Zoo is serving as a refuge for penguins displaced by Bowser's plan to melt Antarctica.[1]