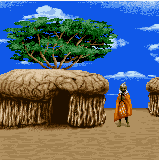 The Maasai village in the SNES version

“Of the more than 70 tribes in Africa, none are more visually well-known than the Maasai. Their lives revolve around their cattle and the money they make from trading herds. But the Maasai are also famous warriors. When the male Maasai reaches the age of fifteen, he is initiated into the warrior group. He dyes his skin a distinctive reddish-orange with pastes from the ocher plant. His hair is tightly braided and then it too is covered with ocher paste. As young warriors, the boys hunt with blunted arrows. Small birds are their first prey. As a reward, the birds are stuffed and tied around a frame which they wear as headdresses.”
—Pamphlet, Mario is Missing!

The Maasai village is, as its name implies, a village of the African ethnic group Maasai. It appeared as one of the three landmarks in Nairobi, alongside Nairobi National Park and the National Museum of Kenya, in the NES and SNES versions of Mario is Missing!. As with the other locations, a swarm of Koopa Troopas overrun the area and run off with a Maasai Headdress, causing the entire village to be shut off to the public. Luigi eventually gets back the headdress and brings it to the village's information booth, where he answers questions based on the Maasai (listed below) to prove that his item is genuine. After absolutely proving it, the Maasai village is reopened for all.