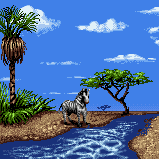 “A mere eight miles from the contemporary city of Nairobi is this authentic wildlife preserve. The park's trails open onto the undisturbed Kitengela-Athi plains to allow the animals to follow ancient migratory paths. The park is full of lions, cheetahs, rhinos, antelopes and many other species. Since the park is completely undeveloped, it provides an amazing drive-through safari in the shadow of a modern, teeming capital city.”
—Pamphlet, Mario is Missing!

Nairobi National Park is a national park near Nairobi, Kenya. It is one of the landmarks in the city that Luigi has to visit during the events of Mario is Missing!. In the game, a Nairobi tourist says that a mother elephant is mad because her baby elephant has stolen by some Koopa Troopas, resulting in the entire park being closed. It does not reopen until Luigi returns the elephant, and he also needs to prove the animal's authenticity by answering two questions about Nairobi National Park (seen below). After returning the baby elephant, Luigi is rewarded 2,400 dollars and the park reopens.