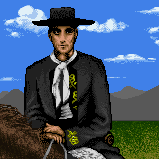 Luigi's photograph of a gaucho in the Gaucho Museum

The Gaucho Museum (in Spanish: Museo del Gaucho) is a museum in Buenos Aires displaying gaucho artifacts. Gauchos are, roughly speaking, Argentina's equivalent of American cowboys. One common tool they used was a special lasso called boleadoras. Luigi once visited the Gaucho Museum when he traveled to Buenos Aires in Mario is Missing!. During the events of the game, a Boleadoras was stolen from the museum by Koopa Troopas. Luigi had to find it and was rewarded 2,090 dollars for returning it to the museum.

The museum is known to be dedicated to Argentine writer José Hernández.

Gauchos are Argentina's version of cowboys. Boleadoras, a Y-shaped lasso with leather-covered stone balls at one end, was the gaucho's most efficient herding tool. In the 1700s, the gaucho lived in the fields with his herds. He mostly traveled the Pampa (plains) while riding extremely fast horses, imported from the Spaniards. The gaucho used the boleadoras to trip the bulls and cows in his herd, causing them to fall. Once on the ground, he could brand or butcher the cattle without help.