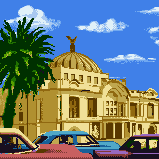 “The Fine Arts Palace, on the main street, Juarez Avenue, used to be a royal palace. The palace was first turned into an opera house and finally an art museum. Admired for its elaborate architecture, the museum's vast collection represents Mexico's greatest artists including: Tomayo,[sic] Diego Rivera and his wife, Freida[sic] Kahlo. Its official Spanish name is Palacio de Bellas Artes.”
—Pamphlet, Mario is Missing!

The Fine Arts Palace (in Spanish: Palacio de Bellas Artes) is an art museum in Mexico City, including drawings by Mexican artists such as Rufino Tamayo and Diego Rivera. Luigi once visited the Palace during the events of Mario is Missing!, after the Fine Arts catalog, a directory of artworks found in the Palace, had been stolen by Koopa Troopas, forcing the Palace to close. Upon returning the catalog to the museum, Luigi was rewarded 900 dollars.