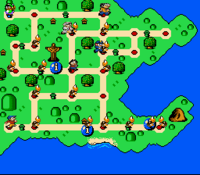 The map of Rio de Janeiro as it appears in Mario is Missing!

Rio de Janeiro (Portuguese for "January River") is the second largest city of Brazil, located in South America. Along with New York City, Tokyo, Cairo and London, it is one of the cities Luigi has to visit in Mario is Missing!.

As with all the other cities appearing in the game, Rio de Janeiro was invaded by Koopa Troopas. The enemies were sent by Bowser to steal artifacts from the cities' landmarks. In Rio, the Troopas stole from the Christ the Redeemer Statue, the Copacabana Beach, and the Sugar Loaf Mountain. Luigi's task was to rescue the city by finding and returning all the missing artifacts.

Rio is also the general setting for Mario & Sonic at the Rio 2016 Olympic Games, since the city hosted the 2016 Summer Olympics.

Information from Mario is Missing![edit]