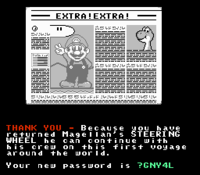 The Steering Wheel is an item in the NES release of Mario's Time Machine. It is the steering wheel necessary for navigating one of Ferdinand Magellan's ships. In 1520, as he was circumnavigating the world with his fleet, Bowser travels back in time and steals the Steering Wheel. He then stores it in his museum, where it is kept alongside other stolen items and some Koopas. Mario later takes it back after entering the museum and defeating the Koopa Troopas, then travels back in time to 1520 with it in hand. After mounting it on the bow of the ship, a news article appears that thanks Mario for letting Ferdinand continue his voyage.