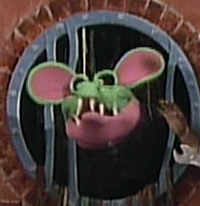 The Ratagator[1] (or Rat-A-Gator),[2] also known as the Radigator[3] or Irradigator,[4] is a large, mutated creature, resembling a mixture of both a rat and an alligator, hence its name (though its more pointed snout and protruded nostrils make it more resemble a crocodile). The Ratagator also happens to be a friend of Mario and Luigi in The Super Mario Bros. Super Show!, often appearing to visit them in their home in Mario Brothers Plumbing.

The Ratagator next makes a small appearance in "Mario Hillbillies," where it allows the visiting Ellie Mae to pet it; when Ellie Mae asks Mario Joe and Luigi Bob, who are posing as their cousins, Mario and Luigi, what the Ratagator's name was, the two respond with the names "Zeke" and "Luke."

Similarly, the Ratagator plays a small role in the following episode, "Baby Mario Love," where it appears, carrying a leash in its jaws, trying to convince Mario to take it for a crawl, which Mario refuses to do, stating he has already taken the Ratagator for a crawl earlier; later, as Mario attempts to tell Luigi that their lives lack glitz, glamor and a certain "je ne sais pas," Luigi, apparently not comprehending Mario's last statement, tells him to watch his mouth, saying the Ratagator is present.