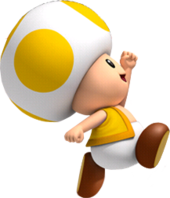 Yellow Toad appears in New Super Mario Bros. Wii for the first time as a main hero and a playable character. Yellow Toad, alongside Mario, Luigi, and Blue Toad, attends Princess Peach's birthday, in where Bowser Jr. and the Koopalings kidnap Princess Peach using a cake. The four venture out through eight world to rescue the princess and defeat Bowser and his minions. After rescuing Peach, Yellow Toad rides on a hot air balloon alongside Blue Toad. They later invite Luigi to ride in their balloon for the journey back to Peach's Castle after he was left behind by his own balloon, sailing off with Mario and Princess Peach onboard.

Within the game's introduction sequence, Yellow Toad is first seen alongside Blue Toad, the Mario Bros., and Princess Peach attending a lunch at the Peach's Castle. However, their peaceful meal is soon disturbed by the sudden appearance of multiple airships consisting of Bowser and the Koopalings. Using a giant mechanical arm (which extended itself from Bowser's airship into the main hall of Peach's Castle where the heroes were taking their lunch), Bowser pulled away Peach's chair from harm and instead aimed a mighty punch at Yellow Toad and his other three friends (causing them to be knocked out). Seizing the opportunity, Bowser used the mechanical arm to scoop up Yellow Toad, Blue Toad, and the Mario Bros., and threw the heroes far across the Mushroom Kingdom. Upon crashing into the Super Acorn Tree (consisting of many Super Acorns) and falling back to the ground with a powerful force, the four heroes soon get up and see Peach's Castle getting invaded by Bowser's forces in the far distance. Deciding to take action against Bowser and his minions, Yellow Toad and his friends run across the plains in the start of a new adventure.

Yellow Toad reappears in New Super Mario Bros. U Deluxe. In this game, he is referred to as simply "Toad" and can be switched with Blue Toad when holding L or ZL (SL when playing with a single Joy-Con).

Yellow Toad along with Blue Toad are featured in the forty first and forty second issues of Super Mario-kun. As the story is based on New Super Mario Bros. Wii, the two Toads are introduced as Mario's new accomplices. Throughout the adaption of the two issues, Yellow Toad plays an important role by journeying alongside Mario, Luigi, and Blue Toad on their quest to rescue Princess Peach from Bowser and his forces.

Both Yellow Toad and Blue Toad are seen in their propeller forms on the cover of issue 41.

In Mario Sports Superstars, Yellow Toad is a playable character in soccer and baseball in his Flying Squirrel and Penguin forms respectively. He also appears in two different collectible cards in these forms.

Yellow Toad and the other New Super Mario Bros. Wii heroes were shown as some of the featured characters in the Nintendo 3DS tech demo. He was shown wearing the Propeller Suit in the demo as like in the original game's box art. The 3DS tech demo screen of New Super Mario Bros. Wii (featuring Yellow Toad and his friends) is later an obtainable puzzle in the Puzzle Swap mode of StreetPass Mii Plaza.

While Yellow Toad is absent from Super Mario 3D World (as he was replaced by Princess Peach in that game), when Toad grabs a Fire Flower, he uses the same color scheme as Fire Yellow Toad.

Unlike the other Toads in the game (with the exception being Blue Toad), Yellow Toad is shown to be an extremely noble character as seen in the intro of New Super Mario Bros. Wii where he ran right after the Mario Bros. to help them on their quest to save Princess Peach. He even went on to fighting the several bosses in the game including Bowser himself at the end (something that most Toads would rarely do considering their fear over Bowser). 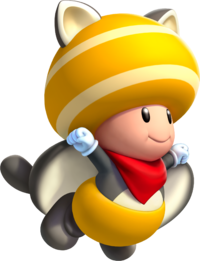 Yellow Toad in his Flying Squirrel form in New Super Mario Bros. U

As with the other playable characters, Yellow Toad demonstrates an extremely versatile moveset, consisting of traditional moves such as the Ground Pound, Spin Jump, and Wall Jump in addition to simpler moves. Regardless of his size, he is able to pick up and carry heavy items and objects as well as other characters with unlimited stamina. He is able to any use items the other characters are capable of using and interact with these characters. His stats are balanced so as not to provide an advantage.

Regardless of his current power-up and item inventory, Yellow Toad usually retains some yellow in his color scheme. His Propellor Suit, for instance, is yellow, as well as his Squirrel Suit. Any additional outfits he dons also tend to feature his emblem on the side.

Any items and power-ups added throughout the series are available for Yellow Toad, giving him the abilities as they would any other character.