Gold Draggadon is a gold-colored Draggadon who appears in the game Captain Toad: Treasure Tracker and its Nintendo Switch and Nintendo 3DS ports. 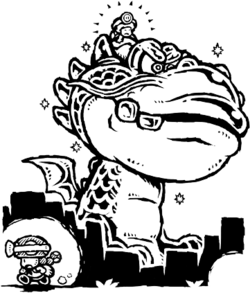 In Episode 3-13: Secret of the Golden Realm, Captain Toad must battle Gold Draggadon. The boss fight is similar to the one with Draggadon, but with faster fireballs and the lava rising quicker. After its defeat, it plays a crucial role in reuniting Captain Toad with his fellow explorer Toadette. When controlling Gold Draggadon, its fire works similarly to Gold Mario's fireballs.

When facing Gold Draggadon for the first time, it lacks a bump on its head, indicating that it is a different Draggadon from the one that Captain Toad and Toadette encountered earlier.