“Sped through one of our Moped Mayhem courses yet? Can you believe that we get 30 competitors on those tracks?”
—MC Ballyhoo, Mario Party 8

Moped Mayhem is an unlockable minigame that can be played only in the Extras Zone in Mario Party 8. 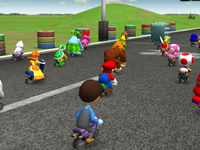 The camera shows the 30 competitors (including the human players) upon the mopeds, and the game plays a racing jingle before the race starts. The starting grid for a race is always made up of seven rows in a 5-4-5-4-5-4-3 manner from the front row to the back row, with the human player(s) always starting in the back row. In two-player mode, the screen splits to show the second player. The lights beep twice, then turn green, officially starting the race and the minigame.

When the player plays as a Mii, it replaces one of the characters in the race.

This game is a racing minigame with three optional courses. It has 30 competitors, ranging from the original playable characters to Shy Guy and even Thwomp. They race around the chosen course three times and compete for first place. Players cannot go the wrong way around the course. There is a ten-minute time limit for this minigame; if the elapsed time reaches nine minutes 30 seconds, a 30-second countdown will appear at the bottom of the screen.

This minigame has a unique CPU system due to the fact that there are 30 competitors instead of the usual four or eight. A CPU's starting position often has no effect on the position the CPU will finish in the race. While most of the CPU racers keep ideal speed during a race, two CPU racers always go very slow in a race (in two-player mode, there is a chance that only one CPU goes very slow), so the human player usually places no worse than 28th in this minigame, even if they do time out in Course 3, unless they do very poorly. These CPU racers are often lapped by the first-place racer before they even enter their second lap. Several CPU racers also go fairly slow, so they may be lapped by the first-place racer as well before they even enter their final lap.

If the human player does not finish in first, there is a chance that a CPU character that is not playable in Mario Party 8 finishes in first. Also, at least 20 CPU racers will be on the final lap by the time the first-place racer finishes.

The player crosses the finish line, and the following happens depending on the number of human players and the result: 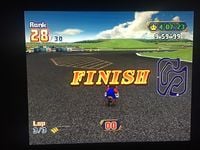 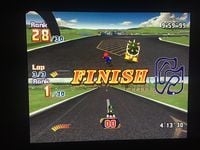 Mario timing out in 28th place in both the one-player and two-player modes
Retrieved from "https://www.mariowiki.com/index.php?title=Moped_Mayhem&oldid=3791035"
Categories: