Mosh-Pit Playroom is a 4-Player minigame in Mario Party 8. Its name is a portmanteau of "mosh pit" and "ball pit playroom." 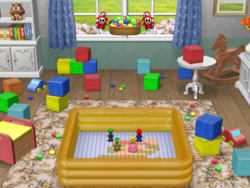 The introduction to Mosh-Pit Playroom

The four toy-sized characters appear in a small container surrounded by other toys in a playroom; the container's floor features an 8-bit Mario from Super Mario Bros. Hovering above their heads are four Fly Guys carrying a basket filled with numerous balls in each player's color. As the Fly Guys hover out of sight with the basket, the four players each spread out to a corner of the container, and the game begins. 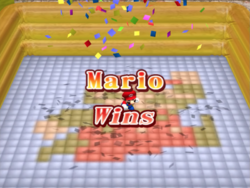 The ending to Mosh-Pit Playroom

The winner is shown standing alone in the center of the container, celebrating as the Fly Guys dump a basket of confetti over them. In the event of a tie, all the characters sulk instead.