Two Shy Guys are driving their farm trucks as both of them have teams in the container boxes. They stop at the middle of some type of farm as the teams get out from the container boxes, one player carrying the hammer on each team. A Monty Mole sees the other team and goes back into the burrow. The camera then moves back from the area, letting the players see the area of the playfield the teams are in. The minigame then starts. 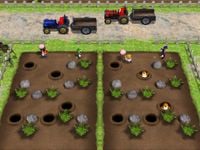 like a hammer, and the players without hammers have to pick all the carrots by holding either

upwards. Teamwork is important in this minigame, since some carrots and Monty Moles must be cleared to get to other parts of the field. Whichever team clears its field first wins.

After the teams do their respective winning and losing animations, the winners run to their farm truck and get in the container box (with their carrots), and then the Shy Guy drives away with the team in the container box. The other Shy Guy waits but then drives away (with any carrots in the back), leaving the losing team behind (seen only in Party Mode).