The solo player turns a rope with a Shy Guy, and three Goombas jump the rope. The Goombas leave, and they are replaced by the trio one by one. The rope stops moving and the game begins. 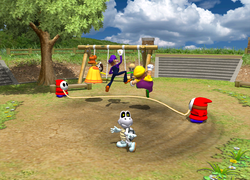 The ending to Chump Rope if the solo player wins