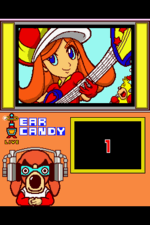 Ken as the host of Ear Candy in WarioWare: Touched!

Ear Candy is a TV show in WarioWare: Touched!. It is broadcasted by the Diamond Broadcasting System and is hosted by Ken the Reporter. It features reports on current hit singers, informing viewers on the weekly top 5 and indicating whether a singer has risen or dropped in position. Apparently, Vanessa was its #1 pop singer for a very long time.

In its only appearance, the top 5 singers are the following:

This particular showing infuriates Vanessa, who sets out to take down Mona.