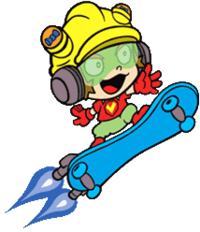 SK8[1] (a pun on "skate") is a special skateboard constructed by Dr. Crygor for 9-Volt. It is 9-Volt's primary way of transportation in the WarioWare series. The skateboard features a rocket booster, allowing it to move automatically or even to hover in mid-air. While doing the latter, its four wheels are also able to retract.

The SK8 is first seen in WarioWare, Inc.: Mega Microgame$!. In 9-Volt's story, he rides it home after school is over. When he returns home, the SK8 is seen against the wall to the left. In the end of his story, he rides it again to buy a Game Boy Advance SP. This time, he retracts the wheels and towards the city. He also rides it to the Gelateria. The SK8 also plays a central role in the skateboarding mini-game Skating Board. There, the player controls the skating 9-Volt and has to avoid obstacles.

In WarioWare: Twisted!, 9-Volt rides on the SK8 to approach 18-Volt. After he agrees to go to his house, he skates away on it.

Artwork of 9-Volt on the SK8 from WarioWare: Touched!

In WarioWare: Touched!, 9-Volt rides the SK8 to return home after getting 36-Volt Man. In the ending, he rides it after discovering that he and 18-Volt are late for school. He also rides it to the Hawt House.

When 9-Volt and 18-Volt's stage is unlocked in WarioWare: Smooth Moves, 9-Volt rides in on the SK8 before jumping off.

In WarioWare: D.I.Y., 9-Volt rides the SK8 in-between every microgame.

In Game & Wario, the SK8 is seen outside of his house next to the door in the intro to Gamer.

In WarioWare Gold, the SK8 is seen in the ending of 5-Volt's story next to the front door.

In WarioWare: Get It Together!, 9-Volt continuously rides the SK8 on the bottom of the screen or ground during microgames. One of 9-Volt's character gallery images features the SK8.

In Super Smash Bros. Brawl, there is a sticker of 9-Volt on the SK8.

In Rhythm Heaven Megamix, the SK8 replaces the regular skateboard in the Wario... Where? version of Super Samurai Slice.