“You're a star, and everyone wants your autograph. This isn't the time to play favorites. Keep signing the same autograph to make your fans happy...no matter what they make you sign.”
—In-game description, WarioWare Gold 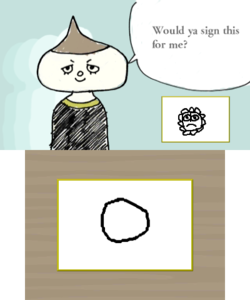 Autograph! is a minigame in WarioWare Gold in the game's Toy Room. In it, the player is prompted to make their signature using the stylus. Signatures that are too simple or too large are rejected and the player will be prompted to redo it. They are then tasked to replicate their signature as much as possible when signing anything fans may give the player. Once several fans have come up to the player, a "That's all, folks!" prompt appears, and the player is given a "fan satisfaction" score; the higher the score, the more the fans are pleased.