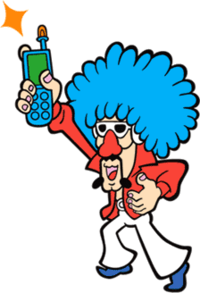 Jimmy's Cell, previously called Jimmy's cell phone, is a mobile phone constructed by Dr. Crygor for Jimmy T. He often comes up with the device during his performances.

In WarioWare, Inc.: Mega Microgame$!, Jimmy's cell phone uses the clamshell design and serves as the backdrop to his stages. In the intro of each of his stages, he pulls out his cell phone that matches the color of his wig as it begins to ring. In place of the Bomb's usual ticking sounds during microgames, it plays key tones. In the stages' epilogues, a new ringtone plays as a corresponding image displays on the cell phone's screen. This new ringtone is what plays during the intro of Jimmy's next stage. The first new ringtone is of a dog barking, the second is of a sheep bleating, and the third is of Wario making various noises.

One of Jimmy's artwork from this game shows him holding his cell phone.

In WarioWare: Twisted!, Jimmy's cell phone now has a red shell by default, a simplified keypad, a camera on the bottom half, and uses a swivel design. It is used as the backdrop to his stage again. If a microgame is successfully cleared, the cell phone closes and takes a picture of Jimmy. Like in Mega Microgame$!, the Bomb's sounds are replaced with key tones. In the stage's epilogue, it is shown that Jimmy's Folks has cell phones similar to his. They use their phones to take pictures of Jimmy.

In WarioWare: Touched!, Jimmy's cell phone is back to being blue with a clamshell design. At the end of his stage's intro, Jimmy takes out his cell phone along with the rest of his family. During gameplay, Jimmy holds his cell phone as his family is gathered around him. Like with previous games, the Bomb makes key tones instead.

Jimmy is seen holding his cell phone to view the newly released console during the intro to Game & Wario. It has been updated to be a smartphone.

In WarioWare Gold, Jimmy's Cell is first seen when Wario calls him to make microgames. It is a souvenir that the player can use to input Phone Codes. In Jimmy's character trailer, he uses his cell to looks at some pictures.

In WarioWare: Get It Together!, artwork of Jimmy using his cell to look at a picture of his family can be viewed in his gallery.

During the Taunt microgame on the WarioWare, Inc. stage, Jimmy can pose with his cell phone.