Nitpickers are flying avian enemies that make their debut in the Donkey Kong Jr. arcade game. Ever since their original appearance, Nitpickers and their successors remained largely unchanged in behavior. 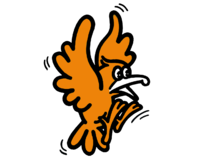 Artwork from the arcade title

In Donkey Kong Jr., a flock of Nitpickers[1][2][3] (also known as Stookybirds)[4] is released by Mario to impede Donkey Kong Jr. from progressing in the Jump Board Scene. The birds are depicted yellow, having a distinct magenta coloration on their wings and beaks; likewise, they are slender and bear an unflinching attitude. They proceed in flying in a straight line after being sent by Mario, traveling along a wide platform. They then descend into the small opening in the platform, continuing their flight thereafter in the opposite direction, under the platform. Occasionally, Nitpickers drop eggs when turning the other direction. The eggs, as well as the birds themselves, are harmful to Donkey Kong Jr. and can drain one of his lives upon coming into contact. On the other hand, Nitpickers can be defeated by having fruit dropped on them.

Along with Snapjaws, Mario employs another flock of Nitpickers (also known as Birds) in the Chain Scene. In the Atari 8-bit, ColecoVision, and Coleco Adam ports, the two types share the same sprite. A Nitpicker also appears on the arcade cabinet instructionsMedia:DKJ Instruction Banner.jpg.

Nitpickers, referred to as birds,[5] return in Donkey Kong Jr. for the Game & Watch. In the New Wide Screen version, they follow only a straight path from left to right and pass by a set of vines located at the bottom of the screen. They spawn at the left side of the screen, do not drop eggs, and do not steer back as they did in the original game, merely disappearing after encountering the right side of the screen. In the Table Top/Panorama Screen version, they come from the top and zigzag their way down the screen. In Donkey Kong II, birds from the previous game's New Wide Screen version reappear for the top screen in which they zigzag downwards.

A single Nitpicker appears in the +-×÷ Exercise mode of Donkey Kong Jr. Math. It flies over the problem numbers on the left side of the screen. When Donkey Kong Jr. solves a problem, it will drop an egg next to the corresponding number. This bird is absent from the equivalent mode in Donkey Kong Jr. + Jr. Sansū Lesson.

In Donkey Kong for the Game Boy, Nitpickers are succeeded by several birds that retain and mix their behaviors. In order of appearance, these consist of Hawks, Kaibādo, and the ostensibly returning Birds. They spawn from nests that are mostly placed high above the ground, subsequently performing three flights across the room. The end of one flight is marked by their encounter with one of the room's margins, after which they descend a little and change direction. They occasionally drop lethal eggs on Mario, provided the protagonist walks underneath it. 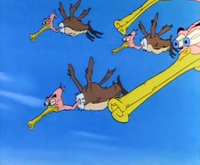 Nitpickers are featured as minor impediments in the episode "The Lost City of Kongoland" of Captain N: The Game Master, where they resemble vultures. They are depicted with long tubular beaks, tapering heads, and bulging eyes, as well as straight and focused looks. In the show, Nitpickers are summoned after Simon Belmont blows into a flute from Dr. Wright while he and the rest of the N Team are cruising down a river in Kongoland. Their beaks are said to be poisonous, and Kevin warns his crew to take cover. The birds immediately show and try to raid the team's vessel, but as they swoop down, Princess Lana draws a bazooka and counter-attacks them with large cork projectiles.

While the Mario vs. Donkey Kong series does not feature the original Nitpickers, it does feature a toy-based variation.

In WarioWare Gold, one Nitpicker has to be avoided by Donkey Kong Jr. as he climbs two ropes in the second difficulty of the Donkey Kong Jr. microgame. It flies on a straight line from left to right, across the ropes.

Nitpicker
Tribe: Fly clan
Disposition: Irresponsible
Game appearances: Jr.
Strange bird discarding its eggs
A bird monster that attacks Junior at Mario's command. It is an extraordinary bird monster that uses its own eggs as weapons. It is slow-moving, so as long as you remember where it drops its eggs, it is not a threat.