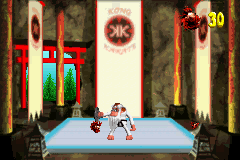 Gameplay of the Cranky's Dojo mini-game

Cranky's Dojo is a martial arts school where Cranky Kong trains himself in the Game Boy Advance remake of Donkey Kong Country 3. It appears in every world except the main Northern Kremisphere map, taking the places of where Wrinkly's Save Cave is found in the Super Nintendo version. It is based on the "Immortal Monkey!" rating for 105% completion in the Super Nintendo version, in which Cranky wore the same outfit.

At Cranky's Dojo, Cranky Kong is training for his next big adventure "Cranky Kong Country". If Dixie and Kiddy Kong drop by, they can assist Cranky in a round of training. If the player is playing for the first time, it costs one bear coin to train; any subsequent time costs two bear coins, although it becomes free after the player either wins or loses at the minigame.

The minigame can be played from the unlockable Extras menu. Like Swanky's Dash, the player can select a challenge per each world. Despite this, every world's Cranky's Dojo challenge is identical.

Playing as Cranky, the player must use the

to aim Cranky's shield and deflect thirty oncoming, curled-up Bristles. These enemies appear from the left and right sides, charging at Cranky from either the top, bottom, or the center. If Cranky is hit, the player loses the minigame. The player wins if Cranky deflects every Bristles. Completing the minigame is required the first time for Dixie and Kiddy to obtain a Banana Bird. Cranky rewards other prizes including several bananas, a bear coin, and a Red Balloon.