This article is about minigame in Mario Party and Mario Party 2. For the last level of Donkey Kong Country, see Platform Perils.

Platform Peril is a 4-Player minigame found in Mario Party and Mario Party 2. This minigame takes place over the skies with several floating platforms. 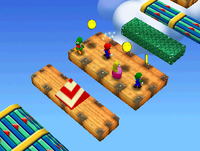 The object of this minigame is to jump from platform to platform and reach the end first while avoiding obstacles. The players can also collect additional Coins located on few platforms. If a player jumps into a pyramid of bricks, they fall and are out of the minigame. The player can also fall if they do not make the platform itself. If a player is jumped on, their movement and jump are restricted for a few seconds. The player that reaches the goal is the winner. If all the players fall off the course, the minigame ends in a draw.

In the Mario Party 2 version of the minigame, the main difference is the addition of more obstacles in the race. There is also the inclusion of moving platforms as well as conveyor belts going either forwards or backwards.