The Miracle Book page "Yoshi's Revenge" is based on this minigame. It shows Mario, Daisy, and Toadette having frozen all of Yoshi's Ukikis, but activating the page gives Yoshi new Shy Guys to counter the team of three. 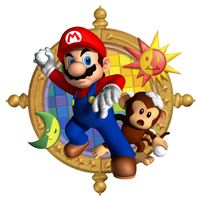 Mario Party 6 official art based on this minigame, depicting Mario and an Ukiki holding snowballs

The team players attempt to throw snowballs at the solo player but miss. The solo player then runs into the back corner of their side, followed by four Ukikis or Shy Guys jumping into the arena.

The object of the minigame is to hit all players on the other side of the field. The lone player is given four computer-controlled teammates (Ukikis during the day and Shy Guys at night). In order to win, the solo player must hit all team players, and the three opposing players must hit the lone player (the four Ukikis or Shy Guys do not need to be hit to win). Each player must first create a snowball by pressing

before they can throw it. Snowballs that hit each other are destroyed upon contact. Players hit by a snowball freeze and are eliminated. If time runs out, the minigame ends in a tie. The same occurs if a snowball hits both the solo player and the last remaining team player at the same time.

1 - This is an error in the in-game text, as there are actually four.