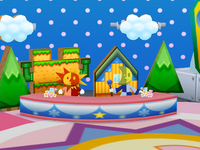 Speak Up with Brighton and Twila

Speak Up is a quiz show minigame in Mario Party 6 in Mic Mode. To play, players must have a Nintendo GameCube Microphone connected or have the settings switched to using the R button on the GameCube controller. At least two players are required to participate, and because of that, it is not possible to challenge computer players. Surprisingly, there are no hostile attitudes seen between the two constantly bickering hosts, Twila and Brighton.

Two to four players participate in a quiz show competing for the most points. Players earn points by answering questions correctly and quickly. When players do not answer quickly enough, the number of points will go down. If a player gets a question wrong, then the other players will have a chance to steal the question in the Speed Round, and if that player gets it wrong, then no one scores and either Brighton, Twila, or Bowser will show the right answer. If a player has a Star Panel, then only the current player gets to answer the question twice. If the player gets two wrong answers, then that player won't get the points and the right answer is revealed. The questions available are divided into five categories: Picture Quiz, Counting Quiz, Memory Quiz, Comparison Quiz, and Variety Quiz. The difficulty of the question is shown in the number of stars in the top, with one star being the easiest and five stars being the most difficult. Players may only choose the more difficult questions as long as the easier questions are done first. As the difficulty increases, however, so does the number of points earned. Players can also request one hint per question to make the question easier to answer, but players cannot request hints if a wrong answer has been attempted without asking for a hint. Bonus panels are hidden throughout the game, and they give players a benefit like doubling the number of points, getting a second chance, and more.

Tallying up the score.

After three rounds of questions, Brighton and Twila tally up scores for the participating players, starting with the player with the least amount of points and ending with the player with the most. At this time, it is possible for Bowser to interfere with the show and take over as hosts while Brighton and Twila get knocked away. Note that this does not always happen, and it happens at random. Not only does Bowser change the aesthetics of the show, but the bonus panels give players negative effects instead of beneficial ones. Additionally, if players get the question wrong, Bowser punishes them by zapping them.

At the end of the game, the player with the most points overall wins a trophy on the screen. If Bowser is present, he also announces the loser of the game and zaps the last place player.

The Picture Quiz requires players to figure out which playable Mario character is in the darkened, blurred, or moving screen. The character can also be a spinning stationary figure at a speed determined by the difficulty and slows down as time goes by. A tricky portion of the quiz challenges the player to name a character while the character is moving.

The background music is techno.

The Counting Quiz requires players to count the number of specified species or objects, moving or stationary. In more difficult levels, the screen is dim and only a spotlight shows what objects are on the screen. This quiz is very similar to the Comparison Quiz in the aspect that both involve counting, but this quiz does not offer a comparison between two areas.

The background music is rock.

The Memory Quiz requires players to use their memory and remember which character hid behind what or what happened as their character is walking by. A cut scene plays with the player's character walking through an area. After the cut scene, the host asks what happened to whom, how many items or characters appeared, or where did someone go.

The background music is ragtime.

The Comparison Quiz requires the player to count objects or species on each side of the screen and seeing which has more or less of the said object/species. Some things include Stars, Shadow Stars, Ukikis, Penguins, Goombas, Koopa Troopas and Thwomps.

The background music is mazurka.

The background music is lounge.

Unlike the others, this category cannot be chosen by default. It is instead chosen by hitting a Shadow Star Panel, obviously only chosen in Bowser Time. The Bowser Quiz features a question where there are eight or sometimes four fruits and players must choose a fruit which Bowser wants to eat. This question is entirely luck-based, but players can still request a hint to see some chosen fruits they can rule out.

Occasionally, an item appears on a selected panel. These items apply certain bonuses to those panels. Many of these bonus panels are found on the harder questions.

When Bowser takes over the quiz to host, the previous item panels cannot be found and are instead replaced by the following panels.