Boo'd Off the Stage

Boo'd Off the Stage is a Duel minigame found in Mario Party 6. The name refers to when someone sings badly at a concert and the audience starts throwing objects at the band or the lone singer.

The players look scared from side to side as a Pink Boo floats quickly toward them as they run away to avoid getting hit.

Players attempt to avoid the Pink Boos as they pass by within 30 seconds. There are walls that make the minigame a little more challenging. As time passes, more Pink Boos appear, some small and some big. If a player gets caught by a Pink Boo, the other player wins. If the players exceed the time limit or if both players get caught by a Pink Boo at the same time, the minigame results in a tie. 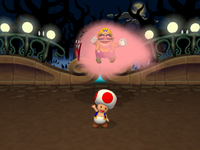 The ending to Boo'd Off the Stage