This article is about the minigame that appeared Mario Party and Mario Party 2. For the item with the same name, see Grab Bag (item). 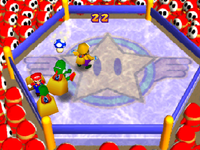 In both games, players must press

In Mini-Game Island in the original game, the player starts with no Coins, while each CPU has 20, and the player must earn 15 Coins to clear the minigame. As this is a Battle minigame in Mario Party 2, this minigame is not present in the Mini-Game Coaster.