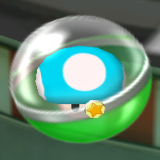 The Slow 'Shroom Orb (Sluggish 'Shroom Orb in Mario Party 6) is an orb in both Mario Party 6 and Mario Party 7. It is light blue in color. When used, it slows down the speed of the Dice Block tremendously and rolls the number in order, allowing players to choose any number from 1 through 10 to roll. Players do this by hitting

when the number below the desired outcome is shown on the Dice Block; if a player wants to get a three, then the player is to hit

when the Dice Block shows a two for example. They are one of the few Orbs used in the Solo Mode in Mario Party 6.