This is not a forum for discussions about Baby Wario. Please ensure all comments are related to improving this article because questions such as "Who is your favorite character/team/area in this game?" are not allowed and will be removed on sight. Please use the Mario Boards or our Discord to talk about Baby Wario.

I didn't know he was in that game! Can you give me a link to the site you found this out on? I might be missing out on a lot more news than just this!
The preceding unsigned comment was added by Stumpers (talk). 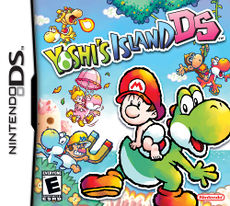 That's so cool! Thx! Where was this posted? -Stumpers P.S. Sorry I doubted it!

Not having ANYTHING to do with if he's in Yoshi's Island DS, He doesn't have his "Elf ears", does he? respond please. User:Maxlover2

think that should be in the article?

In a trivia section, just pointing it out. -- Son of Suns

I added a trivia section. Thanks! I didn't know what to do with that info.

Actually, I checked the sprite sheets in MFGG, and he does have the pointy ears. Yoshi is probably obscuring part of the ear in that artwork on here. - NES Boy 16:01, 9 April 2007 (EDT)

I found out you can be Baby Wario on a light blue Yoshi with the help of an Action Replay. Should i mention that in the article? I'm asking around first.

Again, that would be trivia. -- Son of Suns

I don't think its needed.It would be like mentioning than you can kill red Zinger with a gameshark.User:Gofer

Seem irrevalent. It's not vey interresing or anything and don't give any insight on BW character. Should we put "AHH! AHHH!" on Baby Mario page? Gofer

And your point is..? It can be removed. You sem to be the only guy who think it's good. Gofer

Is Baby Wario in the game??? Because it's on the Mario Super Sluggers article. If so please send me the source that proves he is in it. User: Supersmashbrosbrawl

It says that in the final battle Baby Wario rides on Purple Yoshi, which is 100% true. My problem is Baby Wario actually does not appear in the final battle unless you have him on your back when you reach the door. So... is there any way we should change the article to make note of that? Peanutjon (talk) 11:33, 23 September 2013 (EDT)

At level 5-8 of Yoshi's Island DS, Baby Bowser and Baby Wario are arguing, and the two speak several things, and "Give It To Me!" or "Give It Back!" express well what he is (a selfish). User:Magma