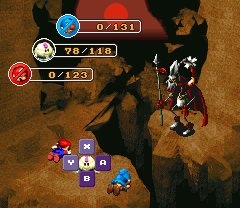 Mario and Geno after being downed by Yaridovich

Down[1] is a status effect in most RPGs. When a character's HP reaches zero, they fall in battle, then lay motionless on the ground. A downed party member cannot attack or use any commands. After a battle is won, any downed party members are restored to 1 HP, with the exception of Paper Mario: The Thousand-Year Door, where their HP remains zero and they must be revived with an item. Many post-boss battle cutscenes will also restore party members to full HP after the boss is defeated.

Party members are effectively out of the battle unless they are revived, either via a Pick Me Up or Princess Toadstool's Come Back technique. If all three party members are downed in battle, a Game Over will be triggered.

When a brother's HP reaches zero, he falls in battle, and then is no longer able to battle or gain experience points until he is revived via a 1-Up Mushroom, a 1-Up DX or, in the case of Mario & Luigi: Paper Jam, a Double 1-Up Mushroom. While a brother is defeated and the enemy turn ends, the other briefly panics while looking at his KO'd brother, then, on the enemy's turn, he will carry him on his shoulders, slowing him down and making it harder to dodge or counterattack, and he will not be able to perform any Bros. Attacks, Bros. Items (Mario & Luigi: Partners in Time; if a certain item requires two or all four characters), or Trio Attacks (Mario & Luigi: Paper Jam). When running away from battle, the still-standing brother will carry the defeated on his back as he runs away, but he will never trip. In the case of all four characters are fighting together in Mario & Luigi: Partners in Time, if an adult brother falls, their respective baby counterpart will carry them out of the scene. If the baby falls too, the remaining adult will have to carry him in his arms when dodging. In the case of when characters, like Paper Mario, fall in battle, Mario and Luigi will not carry them. When all characters fall in battle, the player will receive a Game Over.

If a partner's HP reaches zero with no Life Shrooms in possession, they fall in battle. They cannot act in battle or be revived for the rest of the battle and must be switched out.

A downed partner's HP is not recovered to 1 HP after a battle is won, excluding all bosses except Shadow Queen, when all partners are restored to full HP after falling in battle.

If Mario's HP reaches zero with no Life Shrooms, then he will be down and receive a Game Over.