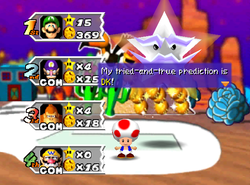 “We're down to the last five turns! Let's take a look at the current standings.”
—Toad, Mario Party Superstars

The Last Five Turns Event is an event from the Mario Party series that takes place when there are only five turns left in the (board) game (four in Mario Party 7 due to Bowser Time). Every Mario Party game has had some form of this event, except for Mario Party Advance and Mario Party: Island Tour, although the latter has a similar unnamed event that occurs on the boards.

The event made its debut in the original Mario Party, which Koopa Troopa talks to the players playing the game to announce the current standings, then predicts who he thinks the Superstar will be at the end of the game. The prediction is chosen randomly; it is not influenced by the players' current stats and has no effect on the outcome of the game. Then, for the rest of the game, both Blue Spaces and Red Spaces are worth twice the normal number of coins when landed on (players will gain or lose 6 coins), and Koopa gives twenty coins to players who pass him. 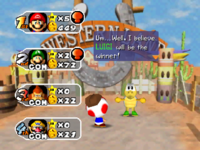 In Mario Party 2, the event is hosted by Toad (and Baby Bowser in Bowser Land), who first gives the current standings then introduce a character to predict the Superstar. Usually, a green or red-shelled Koopa Troopa predicts it, but sometimes Whomp makes the prediction (who will always choose Mario, even if he isn't competing). However, it is always Bowser who makes the prediction (who will always choose the player who currently is in last place) in Bowser Land. The predicted player is given ten coins from the predictor. From that point onward, Blue and Red Spaces' value are doubled again, and players that land on the same space as another player play a Duel Minigame with that player before activating the space. 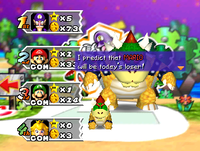 In Mario Party 3, the event is the same as the last game, but it is usually the Millennium Star (and rarely Whomp) who predicts who the Superstar is, giving them ten coins. Sometimes, Baby Bowser hosts the event and lets Bowser predict who the loser is. The predicted player ends up losing ten coins to Bowser. Afterwards, Blue and Red Spaces' value are doubled once more, and players that land on the same space as another player play a Duel Minigame with that player before activating the space, as in the last installment. 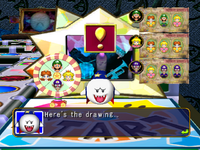 In Mario Party 4, there are new changes to the event. Here, the board's host does a lottery if at least one player manages to get a Lucky Party Ticket from the Lottery Shop earlier in the game. The host spins a wheel showing all four players' faces. If a player's ticket matches all three faces shown from the wheel in order from left to right, they receive a Star. After that, the standings are given, then the host lets the player in last place spin a special roulette. Then, for the rest of the game, the board has one of these four new rules. However, only three of those rules will appear in the roulette, with the Coin Multiplier always being one of those rules:

In Mario Party 5, Bowser hosts the event. He first gives the current standings as usual, then brings the player in last place to him to spin a roulette. Depending on the result, the board will have one of four new rules for the rest of the game:

Eldstar then shows concern over which new rule will be added.

Also, like in previous games, when a player lands on the same space as another player during the last five turns, a duel minigame is initiated. 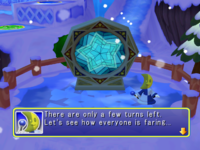 In Mario Party 6, the event is hosted by Brighton during the day and by Twila at night. Whoever is hosting it gives the current standings like always then lets the player in last place spin a bonus wheel, giving them one of the following:

There are only cosmetic differences between Brighton's and Twila's hosting of this event.

As with the last game, if both players land on the same space, then it will trigger a Duel Minigame. 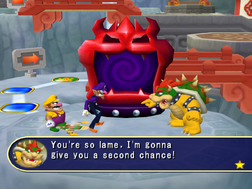 In Mario Party 7, this event is called the Last Four Turns Event, since the Bowser Time event occurs every five turns. Bowser also hosts this event, but makes Koopa Kid give the current standings (in reverse order, however). Bowser summons the player or team in last place to spin his roulette wheel and obtain one of the following bonuses or rule changes:

Like Mario Party 4, a Duel Minigame will no longer occur if a player lands on the same space as another player. 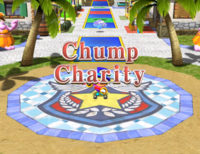 In Mario Party 8, this event is retooled and renamed Chump Charity, and is hosted by MC Ballyhoo. First, Ballyhoo gives out the current standings, as is commonplace with previous games. He then gives the player(s) or team in last place a piece of Duelo Candy. If the game is being played on Koopa's Tycoon Town, Ballyhoo gives the player(s) or team 30 coins instead. Then, his hat, Big Top, showers the entire board with coins, placing a coin bag on each Red Space and one coin on all other spaces unoccupied by players at the time.

In King Boo's Haunted Hideaway, if the player receives a Star from King Boo and he rearranges the rooms, the coins and coin bags will no longer appear.

In Duel Battle and Star Battle Arena, there is a very similar version of this event called Special Bonus. Here, MC gives out the standings, and the losing player uses the dart wheel to obtain a prize to try to catch up to the goal before their opponent does.

The prizes for each board are as follows:

In Mario Party DS, the Last Five Turns Event is renamed Final 5 Frenzy. In it, Bowser gives out the current standings as usual and gives the losing player a bonus, chosen by a wheel. All Friend Spaces are also changed into Duel Spaces.

If multiple players are tied for last place, Bowser will randomly choose one of them to spin the roulette.

In Mario Party 10, a variation of the event appears in amiibo Party, specifically after the minigame set before the eighth turn. When it happens, the standings are shown, then the person in last place gets a coin bonus. Afterwards, players can also pay 40 coins to get two Stars (or possibly 20, 30, or 50 if played on the Toad Board or at least if the top left corner is the Toad Board), and when landing on a Blue Space or a Red Space, players earn or pay 6 coins.

For Super Mario Party, the event takes place during the last three turns. First, the current standings are shown and Toad gives an assessment. A guest character, either the board's unique event character or Lakitu, will enter and pick a character whom they think will win, usually the one ranked lowest. That character will then receive an item. Blue and Red Spaces will have their coin output increased to six in most boards, and ten in Kamek's Tantalizing Tower. Lastly, Kamek will turn the Bad Luck Spaces into Extra Bad Luck Spaces that have harsher penalties.

In Partner Party mode, the events are slightly different. The standings, assessment, prediction, and item reward are the same as Mario Party mode. After the item has been distributed, the number of Stars that can be purchased at a time will increase from one to two, or two to three on Tantalizing Tower Toys. After Kamek changes the Bad Luck Spaces, an additional five allies will be distributed across the board for players to pick up.

In Mario Party Superstars, the event works much like it does in the Nintendo 64 installments, with the value of Blue and Red Spaces being doubled, players dueling whenever they land on the same space, and a winner being predicted after the current standings are announced. The predicted winner will receive a random item, such as a Warp Block, Super Warp Block, Plunder Chest, Boo Bell, or Golden Pipe. They also have a chance of receiving 10 or 20 coins. If the board has Koopa Banks, they will make players who pass them pay five coins instead of three. Additionally, if the board's background music is set to "Modern" in the Option House, a unique "homestretch" variant of that board's music will play during the last five turns.

The predictor is chosen from a small pool depending on the board: