From the Super Mario Wiki, the Mario encyclopedia
(Redirected from Orb Hut)
Jump to navigationJump to search 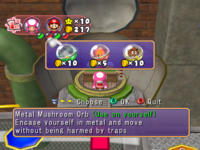 Toadette at an Orb hut in Mario Party 6 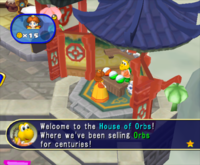 Princess Daisy at an Orb hut in Mario Party 7

“Step into my Orb hut! If it's Orbs you're after, you've come to the right place!”
—Koopa Troopa, Mario Party 6

Orb huts, sometimes referred to as Orb shops, are shops in Mario Party 6 and Mario Party 7 in which players can buy Orbs to use against an opponent or on themselves or lay them down on a space to create a Character Space.

In Mario Party 6, Koopa Troopas or Shy Guys are the shopkeepers, depending on what time of day it is (Koopas during the day, Shy Guys at night). In Mario Party 7, one of three shopkeepers (Goombas, Koopa Troopas, and Shy Guys) appears on two different boards, with special clothing depending on what board the party is being played at. For example, Koopas wear Dutch women's clothing in Windmillville, but they wear Chinese clothing instead on Pagoda Peak.