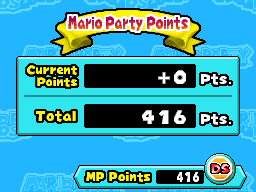 Party Points can only be achieved in single-player mode.

Mario Party Points reappear in Mario Party 9. Here, they are earned by playing minigames, boards, or finishing Solo Mode. They can be used to buy cars and constellations, or even DK's Jungle Ruins at the Museum.

Note: If a player collects less than 10 Mini Stars in a board, then 10 Party Points are awarded regardless.

Mario Party Points return in Mario Party: Island Tour where they are used to purchase bubbles, which are the game's collectibles in the form of character voice clips or music tracks. The amount of Party Points earned is doubled or tripled if played in multiplayer.

Party Points also return in Mario Party 10. They can also be earned by clearing Challenges. These points can be used to unlock new vehicles, characters, music, CPU level and more.

Party Points return once again in Super Mario Party. Players receive points for completing various tasks, like playing minigames, clearing challenges in Challenge Road or winning board games. These points can be spent to unlock stickers, advice and others using the Party Pad. When deciding what to name the Party Points, Kamek suggested that they be called Bowser Bucks, but was outvoted two-to-one by Toad and Toadette.