This article is about Which-Way Labyrinth, a level in New Super Mario Bros. U. For other uses, see Soda Jungle-Ghost House.

Ghost House, is the Ghost House located in a Haunted sub-area of Soda Jungle in New Super Mario Bros. U. It is unlocked via completion of Snake Block Tower and its completion unlocks Painted Swampland and Deepsea Ruins. This level also has a secret exit that unlocks Flight of the Para-Beetles.

The player starts in a room with five doors and a couple of Boos and a ? Block containing a power-up. The doors on the bottom and top-left are fake.

The top-right door leads to a room with Broozers and a large platform that sinks when the player steps onto it. If it sinks too low, the player is dropped into poison. Entering the door at the bottom-right takes the player back to the main room.

The left-most door leads to a room with Boos and a platform that rises when the player is on it. Partway up is a ? Block with a Glowing Baby Yoshi, which is capable of eating the Boos. At the top is a door that leads the player back to the main room.

The right-most door leads to a dark hall lined with Scaredy Rats and a ? Block at the beginning of the hall that contains a Glowing Baby Yoshi. Several platforms are in this room; some floating, others connected by stairs. In the center of the room is a P Switch, which reveals nearby Blue Coins. At the end of the hall is a door leading back to the main room, though the door above (accessed by a hidden passage) leads to a stairway above the main room, which is where the player needs to go.

The staircase has two doors: one at the end of the first flight of stairs and a hidden one after the fake door, which is accessed by jumping over the wall. The hidden door leads to a rooms filled with coins as well as the second Star Coin. The door at the end of the first flight of stairs leads to a room with a tilting platform and a number of Boos and Big Boos. The platform gradually lowers as time continues. If the player still has a Glowing Baby Yoshi, it can make going through the room easier as it can eat the Boos. Partway down, the platform suddenly drops and a ? Block containing a Super Star shows. At the bottom of the room is a door that leads to the Goal Pole. Hitting the Flying ? Block at the right time allows the player to reach the top of the pole.

The player should continue from the same area as the third Star Coin to reach the secret exit. This unlocks Flight of the Para-Beetles. 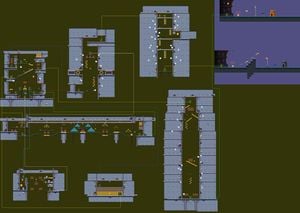