This article is about Giant Skewer Tower, a level in New Super Mario Bros. U. For other uses, see Sparkling Waters-Tower.

Tower, is the Tower course of Sparkling Waters in New Super Mario Bros. U. It is unlocked via Tropical Refresher, and completing the Tower unlocks Haunted Shipwreck, and a cutscene of Peach's Castle being completely shrouded in Magikoopa's tornado. However, the cutscene does not play if Freezing-Rain Tower is completed beforehand.

Similarly to World 4-Castle of New Super Mario Bros. Wii, this is a water course filled with Skewers.

The level begins in a area with Note Blocks leading to a Warp Pipe. The next section is filled with water, and there are current-pumping Warp Pipes at the beginning of the area. The area contains multiple Skewers that come out of the walls, and the player must go through sections in the wall to continue. A Red Ring is found to the left of the area. The player then exits the water, with a lift at the surface, as well as Note Blocks. A section with more Note Blocks and lifts follows, with Skewers acting as obstacles. Another Skewer, as well as a Dry Bones and a Big Dry Bones, are found before the Warp Pipe leading to the next section. A red Warp Pipe is hidden in the wall to the right, allowing the player to access a P Switch in the area with the Checkpoint Flag. More Note Blocks, Dry Bones, Skewers, and a Big Dry Bones are found as the player climbs the section. After a section in which Note Blocks are used to reach semi-solid platforms, along with two Skewers, the boss door is found.

Boom Boom is the boss of the tower. Magikoopa flies in and give him the ability to jump. Unlike in Stoneslide Tower, however, Boom Boom keeps his spin attack, even after getting stomped on. 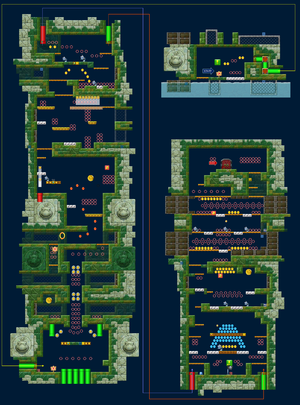