This article is about Haunted Shipwreck, a level in New Super Mario Bros. U. For other uses, see Sparkling Waters-Ghost House.

Ghost House, is the Ghost House course of Sparkling Waters in New Super Mario Bros. U. The concept for the level is similar to that of the Sunken Ghost Ship from Super Mario World. It is unlocked via completion of Giant Skewer Tower and its own completion unlocks Above the Cheep Cheep Seas and Urchin Shoals (which are both intermittently barred by Cheep Cheep enemy courses), as well as an area with a Balloon Baby Yoshi. Completing this level's secret exit unlocks Skyward Stalk.

Unlike the other Ghost Houses in the game, this one takes place in a ruined ship, and some sections are underwater. The level begins with Ghost Blocks, and a pair of floating platforms that circles around a stationary platform. A ? Block containing a power-up by going through a wall, where a Boo is also found. A Brick Block containing a 1-Up Mushroom is found above a pit of water, along with another Boo. Some climbable poles are found in the area, as well as more floating moving platforms. A large floating platform is used to reach a Warp Door, and more Ghost Blocks are encountered. The next area is mostly underwater, with Circling Boo Buddies, Fish Bones, and a Ghost Block acting as enemies. Multiple platforms float in the water, and a Warp Door is found at the end of the area. The following section contains multiple hidden walls, with the real Warp Door found above a fake Warp Door at the end of the area. The Warp Door leads to an area with a Warp Pipe, leading out of the ship where the Goal Pole is found.

In the same room where the third Star Coin resides is an Arrow Sign. Above it is a door that leads to the secret exit. This unlocks Skyward Stalk. 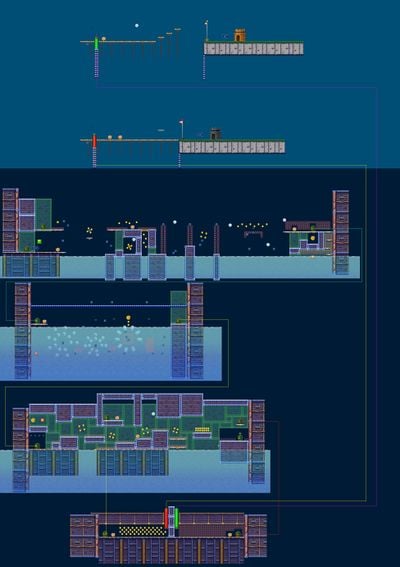