This article is about Tilted Tunnel, a level in New Super Mario Bros. U. For other uses, see Acorn Plains-2.

Tilted Tunnel, or Acorn Plains-2, is the second course of Acorn Plains in New Super Mario Bros. U. It is an underground course that features slanted pipes and shifting crystals. It is the first course to feature the Fire Flower and to have a secret exit. It is unlocked via completion of Acorn Plains Way, and its own completion unlocks Crushing-Cogs Tower. After this level is completed, a cutscene shows the flags on Peach's Castle being replaced by Bowser's flags.

Alternatively, the player can use a P-Acorn to fly up above the wall before the pipe leading underground, which will lead to the end of the level. 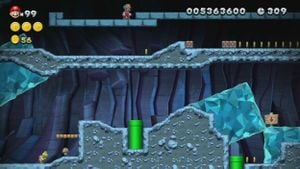 The path to the high ledge

Near the end of the course, there is a pink crystal with a Red Ring that shifts upwards. The player can use that crystal to jump up across the ceiling on top of the course. The player can then jump off a blue crystal to reach an even higher ledge. Now Mario has to run all the way across the last part of the cave section. There is a hidden Warp Pipe at the back. Getting to this secret exit unlocks Blooper's Secret Lair.