This article is about Snake Block Tower, a level in New Super Mario Bros. U. For other uses, see Soda Jungle-Tower.

Tower, is the Tower of Soda Jungle in New Super Mario Bros. U. This level is unlocked via completion of Bridge over Poisoned Waters or Bramball Woods. Beating Boom Boom in this course unlocks a passage to Which-Way Labyrinth.

The level begins in a small, one-screen room where some Big Blocks and one Mega ? Block are found. A Warp Pipe takes the player to the second area of the tower.

The second area features a giant Snake Block, which goes upwards, coming across Amps and their larger sub-species, Spinners, a Red Ring, a small Snake Block as well as two Star Coins. When the Snake Block clashes with a wall, stone blocks on the ceiling break, thus revealing the Checkpoint Flag. The Warp Pipe is located on the right wall.

There is a Warp Pipe below the giant Snake Block on the left wall. Mario needs to go through the same area the Snake Block traveled. Entering it leads to a hidden room with three coins and a second Warp Pipe.

Both Warp Pipes take Mario to a similar area, though this time he encounters bigger Spinner rows, and more Big Amps. A P Switch can be found on the left wall that creates Blue Coins. The third Star Coin is found as the giant Snake Block rises. A Hidden Block containing a 1-Up Mushroom is located on the right wall. To the far left is the door to Boom Boom's room. An Invisible Block hides an item on the wall next to the door. Before the fight officially begins, Magikoopa swoops in and enlarges Boom Boom. 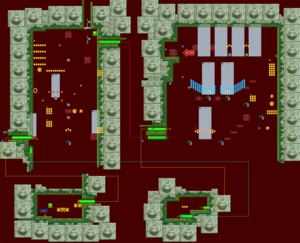