Ghost in the Hall

Ghost in the Hall is a 4-Player minigame in Mario Party 7. The minigame's name is possibly a pun on the name of the 1989 manga Ghost in the Shell.

The game starts out with the first player walking through the rain into a haunted mansion.

Players must choose certain pathways to get to the exit. Some pathways contain Pink Boos that will scare the character and make them go in the opposite direction; others contain doors that will open and stun the character. The first one to the exit (which will be a wide pathway with a red carpet) wins. If nobody reaches the exit within a certain time limit, the minigame ends in a tie. 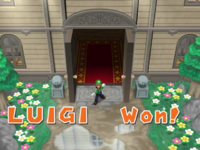 The ending to Ghost in the Hall

The rain stops as the winner walks out of the mansion and does their victory animation.