Helipopper is a Battle minigame found in Mario Party 7. Its name is a pun on "helicopter" and "pop."

The camera turns around from the front to the back of the first player's helicopter, then the screen splits in four to show the other players.

Players attempt to use helicopters to fly around and pop balloons in the sky to earn points within the time limit. There are some balloon bunches in the area that are worth three points. Bullet Bills may also fly by. If a player gets hit by a Bullet Bill, they are stunned for a moment. The player(s) with the most points win(s).

This is one of the minigames that can appear in Decathlon Castle. Here, the player's objective is to pop as many balloons as possible to earn as many points as possible, up to 1,000. 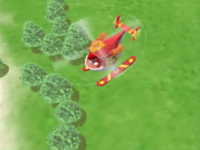