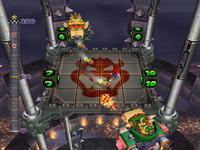 Bowser and a Koopa Kid attack in unison.

The object of the minigame is to make it to the 100th floor while avoiding Bowser, who attacks the player. To beat this minigame, the player must hit four Dice Blocks, and the elevator goes up a number of floors based on the total roll. For example, on one turn, if the player rolls a 7, a 9, a 10, and a second 10, they advance to the 36th floor. The minimum number of floors the player can progress on one turn is four, and the maximum is 40.

After the 50th floor, a Koopa Kid appears and assists Bowser in attacking. Their attacks include shooting three fireballs and three missiles, and when the Koopa Kid appears, they may shoot a laser beam.

The player automatically loses if they get hit by any of Bowser's or the Koopa Kid's attacks. However, in the Solo Cruise, the game tracks the floor the player lost on, and allows them (or the opponent) to resume the minigame from that point when they continue it upon returning to it later. The player wins if the 100th floor is reached, even if there are additional numbers remaining on the Dice Blocks.