Not to be confused with Catch a Tune.

Catchy Tunes is a 4-Player minigame that is found in Mario Party 7. The name is a pun on a phrase that refers to songs that are easily memorable.

Musical symbols fall on one of the two xylophones, making musical sound notes after they hit the ground and disappear. The screen fades and then shows the whole playfield that has the players on it, then the minigame begins.

The players attempt to gather five different musical symbols that come from the sky and fall down onto the ground within the time limit of 30 seconds. Each different musical symbol is required to win the minigame. The shadow of a falling musical symbol hints that there is a symbol that is going to hit the ground. If a musical symbol hits the ground, it disappears and cannot be collected. The players' dialog boxes on the screen indicate which certain musical symbols are collected and which ones are not collected. The players can stun others by simply jumping on them; if a player is stunned, they can barely move or jump for a brief moment. If one of the players successfully collects all five different symbols before the time is up, that player wins. If the time is up and players did not get all the required symbols, the minigame is considered a tie. 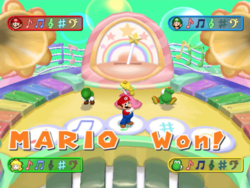 The ending to Catchy Tunes

The losers stand in a row behind the winner, who does their victory animation while the losers sulk.