Track & Yield is a 4-Player minigame in Mario Party 7 and Mario Party: The Top 100. Its name is a pun on the name of the sport track and field.

The players get on the conveyor belts from a red platform and jump over a row of hurdles.

The goal of the minigame is to run and jump over the hurdles on the conveyor belts without falling into the pit. The conveyor belts start to gain speed as time goes on. There are two kinds of hurdles: normal ones and electrified ones. If a player touches an electrified hurdle, they will be temporarily frozen, and thus it may cost them the game. Players who fall into the pit are eliminated. The last player standing wins. If two or more players last the time limit (30 seconds), then the remaining players win. However, if the remaining players are eliminated at the same time, the minigame ends in a tie.

This is one of the minigames that can appear in Decathlon Castle. Here, the player's objective is to survive as long as possible to earn as many points as possible, up to 1,000. The minigame ends after 60 seconds; any player who survives to this point gets the maximum number of points. It also appears in The Top 100's Half Decathlon as the fourth minigame.

In The Top 100, the angle at which the minigame is seen is different. 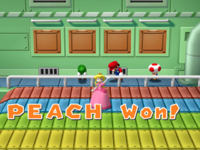 The ending to Track & Yield in Mario Party 7

The winner(s) do(es) their winning animation(s) on the conveyor belts. In Mario Party 7, the losers do their losing animations at the same time; in The Top 100, this occurs on the results screen.