Magmagical Journey! is a multiplayer Bowser minigame in Mario Party 7. Its name comes from "magical journey" and "magma." It is set in a cavern full of lava with rocks that appear as platforms.

The four players find themselves before a large river of lava with no way to cross except by means of several rocks sticking out. Their goal is to reach Bowser on the other side of the river. While crossing, the player also must make sure to avoid touching the lava or being hit by a projectile fired by a Koopa Kid, as either will cause the player to lose. The rocks eventually sink into the lava, so the player needs to stay ahead. Players who reach Bowser at the end win. 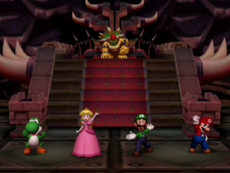 The ending to Magmagical Journey!

Winners celebrate on the platform in front of Bowser. If nobody reaches the end, Bowser laughs and raises one of his fists in triumph.