Weight for It is a Duel minigame in Mario Party 7. The minigame's name is a play on the phrase "wait for it."

The first player knocks a ball past the rival, surprising them, before taking their position in the center of the left platform with Goombas watching.

The two players must send as many of the seven weighted balls to the opposing sides as they can by whacking them with their hammers. If one player knocks a ball into the opponent, that opponent will be stunned for a few seconds. Once time is up, the player with fewer weighted balls on their side wins. While a tie is possible, it is highly unlikely to occur in normal play unless the players do nothing, especially with the ball that spawns in the center. 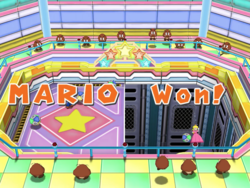 The ending to Weight for It

The winning player celebrates as the losing player's side of the stage falls into the pit, taking them with it. In the event of a tie, however, both sides of the platform fall into the pit.