Bumper Crop is a 2-vs.-2 minigame found in Mario Party 7. "Bumper crop" is a term used for a plentiful harvest.

A Shy Guy waves in a small red pickup truck backing up to the area, then the camera zooms out to show the garden, and the minigame begins.

In this minigame, the players need to go into a small garden to pick vegetables that are separated in three areas (one for carrots, one for turnips, and one for potatoes) and put them in the small trucks. They need to put in two of each vegetable. Team players cannot throw vegetables into their truck if their Shy Guy is holding up an "X" sign. Whichever team gets two of each vegetable into its truck first wins the minigame. If neither team can do this within 45 seconds, a draw occurs. 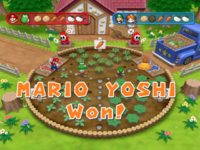 The ending to Bumper Crop

The winning team's truck drives away as the teams do their respective winning and losing animations.