The eponymous machine has four legs with plunger-like feet, and a faceplate with extensions resembling antennae.

The Red Team activates its Hop-O-Matic 4000's four legs and makes the first hop at the starting area. The screen splits in half, revealing the other team.

The goal of the game is to move the Hop-O-Matic 4000 across a town to the finish line by pressing the buttons that appear onscreen. The players on each team alternate pressing buttons. If one player makes a mistake, the team is slowed down for a second. It takes precisely six hops to get to the finish line (excluding the one that is done in the introduction). The first team to make it there wins. If five minutes pass or both teams cross the finish line simultaneously, the game ends in a tie. 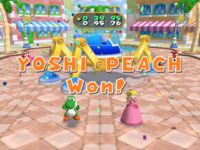 Confetti rains down, while several Goombas and Shy Guys rejoice in the background to the winners as they make victory poses in front of a fountain with their Hop-O-Matic moving. If five minutes pass, all the characters will sulk in their vehicles, which remain still. If both teams reach the finish line simultaneously, all the characters will celebrate.