Oil Crisis is a 4-Player Mic minigame in Mario Party 7. The term "oil crisis" references the 1973 oil crisis, which occurred when the price of oil skyrocketed due to an embargo on the part of OAPEC.

The four players are shown waving at the screen while standing in front of their cars.

The players must navigate their cars around the oil spills (which will slow them down) and collect pink fuel cans to get to the finish line. Players must command their cars to move left or right. During each player's turn, they also have the opportunity to use their Mushroom and receive a speed boost (like in the Mario Kart series) by shouting "Mushroom" into the Mic; however, this can be done only once. If there is no Mic, the commands are selected from a blue box. The finish line is 200 yards/metres away from the starting point. If the player runs out of fuel, they stop and their distance is measured from where they are to the starting point. The player who gets the farthest is the winner. If more than one player crosses the finish line, then those players win. There are no ties. 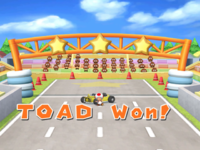 The ending to Oil Crisis

Winners stand in front of their cars at the finish line and perform their victory animations.