Dinger Derby is a 4-Player minigame in Mario Party 5, Mario Party: The Top 100, and Mario Party Superstars. It was also included as part of a Mario Party 5 demo found on a bonus disc bundled with preorder copies of Mario Kart: Double Dash!! The minigame's name is a variation of the name of the real-life Home Run Derby. 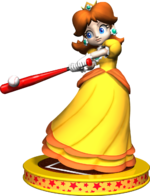 Artwork of Daisy swinging a bat from the minigame

The camera is zoomed in on one of the players, and zooms out as each of them takes a practice swing, then hits a baseball. In The Top 100, only the animation of players hitting a baseball is shown.

Players earn ~47.368 points times the number of balls hit for the first 19 balls; after 19 balls, the player scores 900 points plus another ~9.091 points for each additional hit. Decimals are rounded down.