The crowd is cheering in the background with the team characters on the tightrope looking at the camera. The lights then go out with the swinging lone character dropping two balls between the team characters, scaring them as they almost lose their balance. The lighting gets brighter and the minigame begins.

The goal for the solo player is to eliminate the three opposing players, who are on a tightrope. The solo player drops balls from a swing, while the other three players walk on the tightrope, trying to evade the balls that are falling from above. They can also jump to maneuver around other players, but the jumper gets stunned after jumping for trying to attain balance. Anyone caught in the way of the balls will be knocked off the tightrope and out of the minigame. The solo player wins if they knock off all the opponents. The team players win if at least one of them lasts 30 seconds on the tightrope. 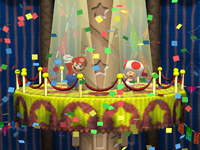 An ending to Big Top Drop if the team wins