Tower is the tower of World 5 of New Super Mario Bros. 2. Its primary feature is a moving fence that moves with rising lava, along with Burners.

Mario starts in an area containing a long ? Block containing a power-up, and Note Blocks that are used to reach a fence. A Warp Door is found on a platform at the top of the area. Going through the door causes Mario to enter an area with rising lava. Two fences with Climbing Koopas on them are found above a pit of spikes. A ? Block with a Dry Bones on it is found, along with a 90-degree turned H-shaped fence that begins to move when Mario climbs on it. Several Burners are found, along with a fence with a Climbing Koopa on it. The moving fence then turns 90 degrees as it passes by two Burners. More Burners are found, and part of the moving fence breaks off from the rest. A Red Ring is found near the top of the area. At the top of the area, a Warp Door taking Mario to the next area is found. A Checkpoint Flag, two ? Blocks, and another Warp Door are found.

Mario then enters another area with rising lava, where some Burners are found on the ground. There is a small pipe that leads to an area with Note Blocks, one of which has a P Switch that creates Blue Coins. To exit the area, Mario needs to activate a Hidden Block containing a 1-Up Mushroom. There are also two ? Blocks that contain power-ups. In the main area, some Note Blocks are used to reach a platform, where another moving fence is found. Some spiked ceilings are found, along with a platform with a Dry Bones on it. A Coin Block and three more Note Blocks are found. Two pieces of the moving fence then separate and turn, and a stationary fence with a Climbing Koopa on it is found. The two pieces of the fence then come back together as the fence reaches the top of the area. A Hidden Block on the left contains a power-up. The boss door is found, leading to a battle with four Reznor. 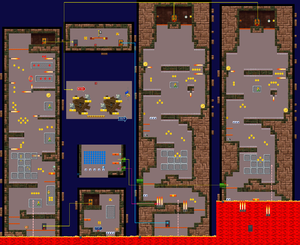