-4 is an auto-scrolling beach-themed level. It features a Porcupuffer which chases Mario all the way through the stage which has wooden lifts and moving platforms. Koopa Troopas are found along the way as well.

Mario begins the level in an area with three ? Blocks and a Warp Pipe. A Porcupuffer is found, and it swims into the next area. After entering the pipe, Mario arrives in an autoscrolling area, where a ? Block containing a Mini Mushroom and the Porcupuffer can be found. Two lifts are found, followed by a platform with a Koopa Troopa on it. After more lifts and Koopa Troopas, the Checkpoint Flag is found. Two ? Blocks are found, along with more lifts and a Koopa Troopa. A platform with a ? Block and a Red Ring above it is then found. More Koopa Troopas and a Roulette Coin Block above lifts are found, followed by a blue Warp Pipe. The pipe leads Mario to an area with a Porcupuffer and lifts bouncing off tracks. The Goal Pole is then found. 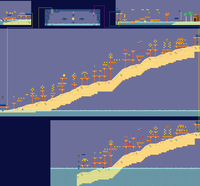